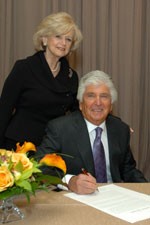 Beverley and I were both brought up witnessing giving. For me, as a child, I watched my grandmothers spend their time raising money for needy people and for their synagogue. For Bev, it was her father who made giving a priority. No matter how little he had, giving to UJA and his synagogue was most important to him. Just before his death, he was concerned because he couldn't remember if he had paid his UJA pledge.

My first experience with giving came when I was 20 or 21, shortly after Bev and I were married. I walked into the office at my first job and I found a UJA pledge card on my desk. My boss had left it there. I asked him what to do with it, and he explained that I was more fortunate than many people, and it is my responsibility to give what I could and to honour that pledge. He said that I should do my best to increase that amount every year.

We have followed that advice since that day. My boss and mentor at the time described giving the way everyone should understand it. You must pay back. I became involved with UJA Federation, rising to the rank of Campaign Chair in 1994. Bev and I knew that we had this commitment and realized that part of what we were doing was also setting an example for our family. We have three children and six grandchildren. We want them to be involved in the community, involved with Israel. We hope that our family has observed our dedication to the community, and will carry on this tradition and obligation to the best of their ability.

There are so many heroes in the Toronto Jewish community and they come from every walk of life - the professionals at UJA who are the driving force behind the scenes and who encourage volunteers at every level and the lay leadership, men and women who have set an extraordinary example for the community. These are people who give every ounce of their time and energy. These are the people who inspired Bev and I to become involved. They showed us that we too could take on roles, starting with small steps and learning along the way, from them, the true meaning of leadership. The amounts people donate may change, but their principles do not. We often wondered over the years whether future generations would be as dedicated to supporting the community. We are happy to say that we are impressed by what we see, by the young people who have come forward to contribute, not only financially, but also are giving their time to working hard on the behalf of our community, Israel and for needy Jews everywhere.