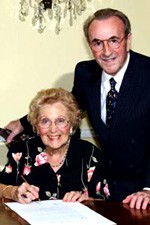 My wife and I survived the war in Russia where our son Jerry was born. After the war we emigrated to Israel.

Jerry trained as an aeronautical engineer. He became a prominent mechanical engineer in the Israel Defense Forces. He went to France for training to bring the first Mirage aircraft to Israel. He worked for El Al after he left the Army. When he came to Canada for a visit in 1967, he secured a job at DeHavilland.

A year later, Jerry brought us to Canada.

Jerry was our only child and our pride and joy. We built everything for him. We worked our whole lives for him. But he died of heart failure in 1998 when he was 55 years old and our whole world came crashing down. Our only child was gone. It's not supposed to be that way. He's supposed to take care of us. Yes, we have other family. But they're not our son. They're not Jerry.

What could we do? How could we keep Jerry's memory alive? I agonized about it for months. Every day, I walked alone, thinking. And then I had an idea. We would perpetuate his name by helping other young people become successful mechanical engineers just like Jerry had been.

Once I decided that I wanted to memorialize Jerry's life with a scholarship for the future, I decided to start an endowment fund with $100,000.00. Each year, the income from the Jerry Felzen Memorial Fund helps several students from the Community Hebrew Academy of Toronto (CHAT) pursue careers in mechanical engineering.

The future of the Jewish people relies on sound education for our young people, and I want to help our young people achieve that wisdom. The Jerry Felzen Memorial Fund helps form bright minds.

The Jerry Felzen Memorial Scholarship is a challenge from us to anyone who has suffered a tragedy similar to ours. We can't bring our son back, but we can use his memory as an opportunity to help others, and help secure the future.