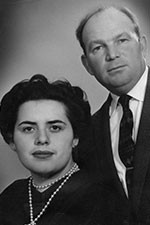 Tragedy and loss were at the core of Eva’s Z"L life, yet her indomitable spirit and the love she found in Canada enabled her to rise above every disadvantage.

Eva arrived in Canada with her mother in 1957, aboard the RMS Empress of Britain. Eva married Eugen Ferenci one year later, in Toronto. Eugen was also a native Hungarian, born in Tolcsva, in 1924.

Eva and her husband both shared the loss of loved ones in the darkness of the Shoah. Although Eva’s mother survived the Shoah, her father perished in a labour camp on April 22, 1943, in Usica, Ukraine. Eugen’s father, mother, brother, two sisters, and grandmother were killed in Auschwitz. Only one brother is known to have survived.

A new start in Canada brought out Eva’s love of life. She worked hard, enjoyed being fashionable, and travelled the world, usually accompanied by her mother. But Eva never allowed herself to forget the past and dedicated herself to many good works as a way of being a good Jew and honouring the memory of those who perished. She was an active member of the sisterhood in her synagogue.

Eva and Eugen’s love for the State of Israel and its people is a lasting legacy. In her will, she donated her entire estate to support cultural activities in Israel, to memorialize her and her husband’s families.

As told by her Executor, Sharon Goldberg