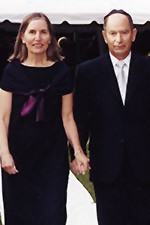 When asked to name some of the greatest influences in both my life and my late husband’s life, our grandparents are the first that come to mind.

Both my and Stanley’s grandparents — all immigrants to Canada — were incredibly giving and hardworking. Despite their modest means, there was always a way for them to give back as they would always recognize those in greater need than themselves. For instance, my grandmother insisted every Jewish person must have a home-cooked Jewish holiday meal and she prepared one for the Jewish inmates at the Kingston penitentiary during the years that she lived in Kingston. My grandmother was also the first treasurer of Toronto’s Palmerston Synagogue and was able to collect enough money for it to be built.

Anecdotes like this fill my memories and, without a question, shaped me and Stanley into the adults we became. We were always devoted to charitable causes — such as palliative care and distress centres as well as Out of the Cold, to name a few — and we made certain that Jewish values and traditions figured prominently in our lives as a couple and, later, as parents to our two children Dana and Mark.

Stan was a family physician and he worked at the same medical office for over 45 years. There is even a room at Etobicoke General Hospital is his name, that was established through a contribution made by patients of Stan’s who were markedly touched by his professional dedication. He was devoted to his patients, and even to the children of some patients, and this translated to all he did. He was an avid photographer, sports enthusiast, and world traveller. Among our many travels, Israel was a natural required destination. We celebrated our daughter’s bat mitzvah there, and I had the fortune to return a second time to teach ESL.

After Stan’s untimely death last year, I felt it was necessary to carry on the example of the act of Tzedakah first set by our grandparents and what also became a way of life for us. So after consulting my children and grandchildren, we decided to establish an endowment fund in memory of Stan and in honour of our family’s tradition to live generously.

The fund is a way of ensuring that our family’s future generations will be influenced as we were by previous generations. And it will also guarantee that the Jewish community will be benefited, indefinitely.

I am so pleased to see my children, and their spouses Michael and Michelle, already displaying the same kindness and generosity in their lives and this fund will be an immortal record of where the influence began and who it helped.