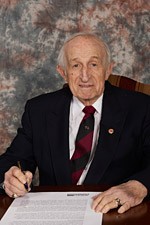 Giving is far greater than receiving. That is one of the most valuable lessons my father taught me. He was a labourer, a Polish immigrant in Toronto, who arrived with my mother and me at the time of the Great Depression. He never made a lot of money but what he lacked monetarily, he made up for spiritually.

He always visited family and friends who were ill in the hospital, he always had a smile to offer anyone he passed on the street, and he remained active with his Beizetchiner Society all his life, all the while maintaining a committed Jewish life by dovening every morning, before his 8 am shift at the factory would begin, and performing cantorial services when he was called upon.

My mother was also an extremely devoted person who looked after my father, myself, two siblings, her parents and two brothers. We were immigrants so we remained very close – physically, because we all lived together in one home, and emotionally, because we spent so much quality time together, rooted deeply in Jewish tradition and practice.

For these reasons, it was inevitable that I would seek to help others throughout my life. My parents’ giving nature was infectious.

I became a Chartered Accountant and grew my business over time. But what fulfilled me was my volunteerism. With my late wife Ruth, to whom I was married 56 years, we gave of our time to many charities including the State of Israel, B’nai Brith, UJA telethons, UJA Societies Division and others.

We saw the community expand exponentially over two short generations and today it astounds me how the Jewish Community is thriving. I can only hope that this upswing will continue.

In order to contribute to the strength and fortitude of my community, I would like my gift to continue even after I am gone. That is why I set up an endowment fund with the Jewish Foundation of Toronto. Hopefully, some will remember that I did something, that I was not simply existing. And that, like my father showed me, I too can impress on others the value of Tzedakah, in various forms.