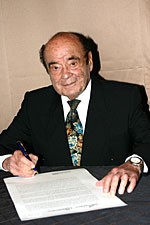 One of the most important life lessons taught to me by my parents was to give and to be there for others. Tzedekah was always important in our family. My father, Morris Frankfort, in particular was an extremely devoted humanitarian. There probably wasn’t a cause or need in this community that he didn’t contribute to in some way – in time or money. As Vice President of the Red Cross, he was considered a tower of strength for the organization. I remember accompanying him as a teenager to greet Jewish refugees on behalf of the Red Cross and Jewish Immigrant Aid Services (JIAS). They fled war-torn Europe so our role was to make those first few steps in Canada a little easier for them. My father worked extensively volunteering with JIAS as well as State of Israel Bonds, Toronto Jewish Free Loan Cassa and so many others. He was particularly passionate about his role as President of the Toronto Jewish Home for the Aged and his involvement in founding Baycrest.

I have tried to follow in these footsteps in my own way over the years. I support Jewish organizations because I feel strongly about the survival of the Jewish people and it’s the right thing to do. I am particularly interested in supporting healthcare, education and culture. I suppose I inherited the interest in the latter from my mother, Ida, who was very passionate about arts and culture and inspired my own appreciation.

Tzedakah and culture can be a powerful mix. Telling our stories through art and culture is critically important in preserving our heritage and ensuring the Jewish people thrive in our vast world. I’ve been involved in many charitable pursuits and do my best to give where there is a need. I have been active as an Executive Board member of the Canada Israel Cultural Foundation since its inception in 1963. This has been a very rewarding experience as has my involvement on the Board of Governors of Mount Sinai Hospital where I have also established a Chair in Family Medicine.

What’s a legacy? I suppose making a difference to help better the lives of others is worthwhile. I hope my story in some way inspires others to find their own way to give – and to tell their own story of Tzedakah because together we will create a much more powerful Jewish legacy.