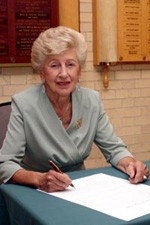 I was born in Upper Silesia and my earliest memories of tzedaka was when my mother would send us to deliver food to needy Jewish elderly in the neighboring town. We lived on the Polish German border and witnessed the expulsion of Polish Jews from Germany. They were left without food or shelter so my mother offered our kitchen to prepare meals and we helped to deliver them.

Little did I know that my happy childhood would become justa memory with the outbreak of the war.

What followed was deportation to a ghetto in Poland, then three years in concentration camp, and after liberation, four years as a stateless refugee in a DP camp in Landsberg.

We arrived in Canada in 1953 and began to rebuild our life in the shadow of horrific memories. I considered my survivala gift to be dedicated to the memory of the victims of the Shoa. Amidst the silence of the world the plea of the victims REMEMBER US became a commandment.

In 1962, I began to speak about the Shoa, first in local schools, then from coast to coast across Canada. The privilege of serving as Chair of the Founding Committee to create the Toronto Holocaust Centre was the highlight of 43 years of volunteerism which included Israel Bonds, Soviet Jewry, Holocaust Remembrance Committee, Yad Vashem, Ontario Cabinet Round Table on Anti Racism, Federation and Chair of Ontario Region for Canadian Jewish Congress.

I care deeply about the welfare of our people here and inIsrael and am grateful to have had the opportunity and means to make a contribution. It is my hope that my children, Josey and Jack, as well as my grandchildren, carry this torch into the future.