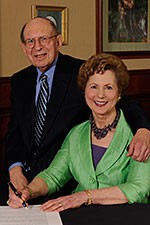 I am blessed that special people, events, and opportunities have shaped my life’s direction. There were numerous influences that helped lead to my deep attachment to Judaism and Israel. They include my parents, Lily and Victor Dobrinsky, who encouraged me to study; my grandfather Aaron David Honigman’s Old Testament stories from youth; my brother Herbert’s passion to become a rabbi; my getting turned on to Judaism at a religious camp in the Catskills; my less-than-comfortable parents allowing me to immerse myself in Jewish studies in New York; my being admitted to Shaare Zion evening Hebrew High School; my helping to establish the Mesibos Shabbos Day Camp as girls head counsellor at age sixteen; my winning a scholarship to the Mador Studies Program at Camp Ramah, Poconos; my starting the Jewish Arts and Crafts program at both Temple Beth El and the Chevra Kadisha Synagogue after teaching Sunday school in the mornings. I was completely involved — and I loved it all!

Despite the lack of a parochial-school background, I attended the Hebrew Teacher’s College of Montreal for two years, followed by a year of evening graduate studies in Hebrew literature there. Then I taught at the Young Israel Day School, continuing my university education at night. I took undergraduate courses in art history and world religions at Concordia and graduate studies at McGill University as a Partial Student.

In July 1962, I married and moved to Ottawa. There our first son, Ron, was born. I taught Hebrew kindergarten, and continued with art history courses at Ottawa University and the National Gallery of Canada. In 1966, we moved back to Montreal, where our son Chuck was born. I completed both my undergraduate and graduate degrees in art history at Concordia University. There I originated and taught an unusual undergraduate course in the Department of Religion called “The Jewish Experience in Art,” the first course of its kind in Canada.

Eventually, I became Head of the Art History Department of Marianopolis College, where I taught courses from prehistoric to postmodern art over many years, with an emphasis on Nineteenth Century Art. I was delighted when the dean invited me to initiate a course on “The Jewish Experience” — a first for this Catholic college. The most challenging part was building a library from scratch to support this endeavour. What a thrill to share Judaic values, practices, and contributions!

In 1985, we moved to Toronto because my husband, Louis, became executive vice-president of Shoppers Drug Mart. After retirement, he became the president of the Council on Drug Abuse and gave of his time to many other organizations as well. I worked, over the years, at the McMichael Canadian Art Collection, initiating new programs, lecturing, writing, and teaching docents and students. Upon retirement I increased my volunteer hours at UJA, Magen David Adom and the Kidney Foundation of Canada – all close to my heart.

I am happiest being with my family — my amazing husband of fifty years, Louis Goelman; our sons and their families — Ron, Cindy, and Kate Lily; and Chuck, Shelley, and Ryan — as well as my extended family and special friends. After forty-six years of my volunteering for UJA, Louis and I feel most privileged to be able to establish ongoing giving to Jewish communities in Toronto, Israel, and abroad through our new Sharon and Louis Goelman Family Endowment Fund.