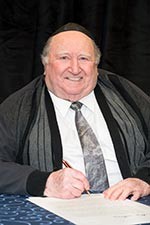 My family’s story is steeped in the dynamics of the immigrant and Canadian-born experiences that define our Jewish community. My parents and eldest brother immigrated from the Ukraine. Initially settling in downtown Toronto, our lives were built on the far outskirts of the big city.

My father prospered as a builder before the Great Depression but suffered, as did others, when it hit. He grew ill and was advised to change vocations. He bought a farm in Whitby and made the move to rural life from 1933 to 1939. Later, he purchased a former Catholic camp in Pickering. Dad converted the buildings into summer cottages and rented to Toronto’s vacationing Jewish community. Our family moved into the old farmhouse on the property, but it was like pioneering in olden times, without hydro or indoor plumbing. We struggled and survived. My mother insisted on keeping kosher, so meat was ordered from Toronto.

During the war, Dad, a carpenter by trade, worked on the development of the Oshawa Airport as a pilot training school, and at General Motors on the all-wood Mosquito Bomber. We moved to Oshawa in 1952, where Dad and my brother built houses and where I would form my own building company. Dad passed away in 1957, after which my brother Nat and I started a partnership of over 55 years.

I first met my wonderful wife, Lillian z”l, in the early 1950’s. I was part of a choir at the YMHA on Bloor Street. Lil was teaching at Ionview Public School in Scarborough. We married in 1956 and set up house in Oshawa, where our children – Barry, Gail, Heather and Bayla - were born.

Lil was a loving mother and doting wife. Family was a priority and we travelled often to the city to spend time with hers. Eventually, we moved back to Toronto where Lil’s passion for volunteering flourished. She was an accomplished artist, teaching art to seniors at the JCC for many years, until she too was a senior. She also taught ESL at the National Council for Jewish Women.

Our lives have been shaped by two distinct regions and we benefitted from the best of both. My brother and I supported local sports teams in Oshawa, and university scholarships.

Equally, our roots in the Toronto Jewish community are deep. Lil’s volunteerism and affiliation with the Drildzer Society, where her parents were also members, inspired us all. The endowment fund I established at the Jewish Foundation of Greater Toronto is an important way of giving back.

Our family grew during a time when the Toronto Jewish community was becoming a model of leadership in the Diaspora. It is gratifying to know that we will also be part of its Jewish future.