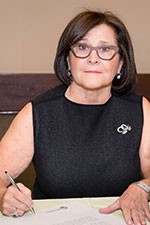 Although I was an only child, my personal history nevertheless instilled in me the importance of Community. I was born in Munich, Germany in 1947 to Nathan and Sara Goldlist, Holocaust survivors who were living in a Displaced Persons Camp. My mother was hidden by a Polish family along with her mother, Alta Szoor and her four brothers. My father, the only survivor in his nuclear family, survived the hardships of a labour camp.

Assisted by JIAS, we soon emigrated to the U.S., settling on a chicken farm in Dorothy, New Jersey. There, a small group of Holocaust survivors worked hard to build new lives for their families, sharing their stories of survival and their hopes for the future. They constructed a Shul and created a Hebrew school for their children. lt still amazes me how these few struggling families managed to build such a strong community!

Ultimately, my parents wanted to live in a much larger Jewish community and when l was 12 we moved to Toronto where my father had cousins. Toronto was home to a large group of survivors and landzmen from my parents' home town of Chmielnik, Poland. They established a benevolent society and their own synagogue. My grandmother, one of the few Chmielniker survivors of her generation, was the matriarch of this community. She and my uncles lived in lsrael from 1947 to 1957 and then joined us in Toronto. This family exhibited a closeness that has been an inspiration to me for my entire life.

My parents and my family were role models for the importance of connection and tradition in Jewish life. Larry, my husband, came from an assimilated American family where these values had become somewhat watered down. Larry and I have tried to instill in our children, Jackie, Lisa and David, and in our eight grandchildren, the values of commitment and dedication to Judaism and to lsrael. Shabbat dinners are a central part of our family life. Our grandchildren have all attended day school and the older ones have travelled with us to Israel.

Commitment to lsrael, Holocaust education and day schools are cornerstones of our Jewish Community. Many families have the desire but not the means to provide their children with a day school education. We hope that our donation can benefit these families.