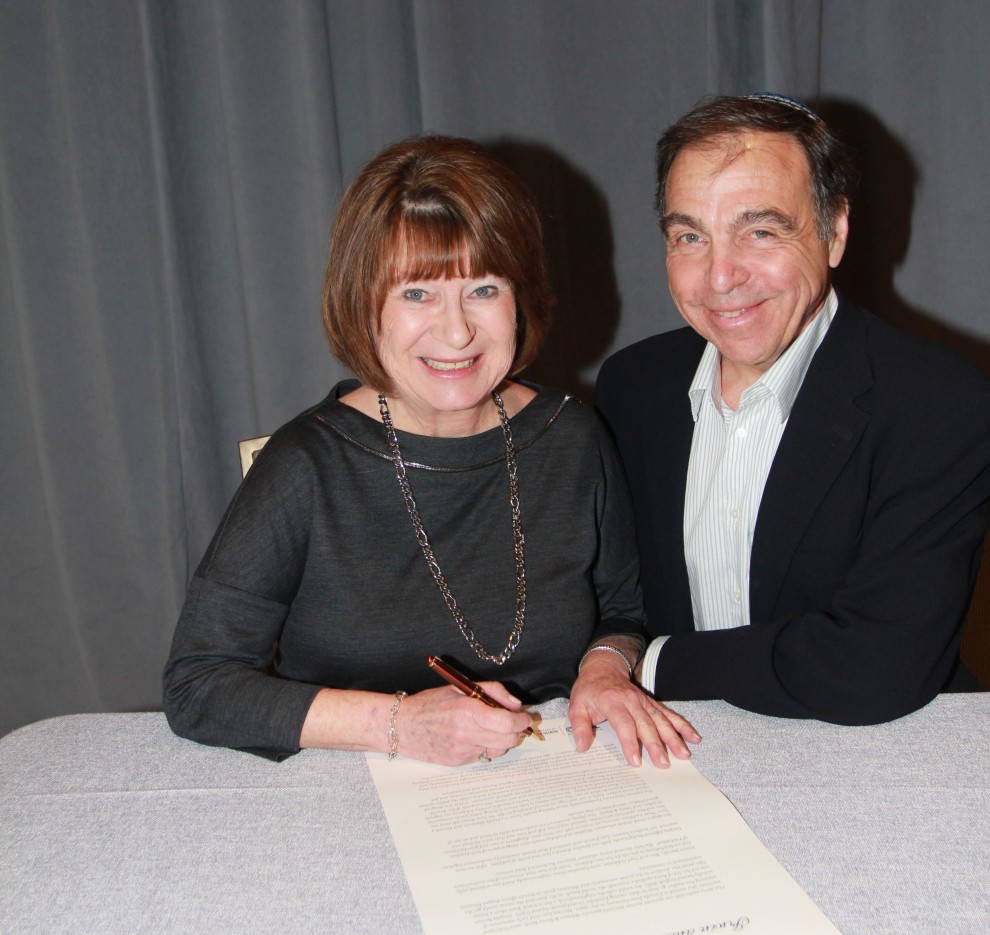 Our story starts with our parents’ stories: Miriam’s parents, Shloime & Berta Bank, were Holocaust survivors who arrived in Canada from Germany in the 1950’s. Miriam has vivid early memories of watching her mother go door-to-door, raising funds for United Jewish Appeal (UJA).  Despite Berta’s initially limited English skills, she would walk the neighbourhood, a list in hand. Even when a house was not on her list, if Berta spotted a mezuzah, she would knock on the door and the owner would get the UJA pitch! Her devotion to the Jewish community and Shloime’s pride in Berta’s efforts shaped Miriam’s commitment to community.

Irwin’s parents, Ben and Pearl Goldstein, were Canadian born. Unfortunately, Pearl was widowed early and worked fulltime to provide for her two children.  Irwin also has vivid memories of his mother’s love of Yiddishkeit.  She later devoted many volunteer hours to the Bernard Betel seniors.

Despite different backgrounds, both our families shared a love and pride of Judaism.  After we were married, our mothers became close friends and continued their Jewish community involvement together.

Synagogue, Israel, Jewish education, Shabbat and holiday meals were integral parts of both families’ lives. These traditions are ones we continue with our three sons, daughters-in-law and grandchildren: Ben and Sari, and their sons Dylan, Samuel and Jonas, Jeff and Lisa, and their sons, Michael and Brayden, and David & Elyssa.  Our family members have made many visits to Israel and all our of grandchildren attend Hebrew Day schools.

Our fulltime careers are fundamentally about helping people. Irwin is a family physician and Miriam a retired social worker.  Early in our marriage, we started donating to UJA. We have always felt every one of us has a duty to do what we can. The responsibility to help ensure a strong, active Jewish community is crucial in these turbulent times.  We are fortunate to live in a peaceful country, but forces are aligned against Jews and Israel and are finding new adherents and new voices. The rising tide of the ‘Boycott, Divestment & Sanctions’ group masquerades as a legitimate political movement.  In fact, it is designed to delegitimize the right of Jews to Statehood in our historical homeland and to create the public opinion necessary to support a destructive outcome. We are keen to see all anti-Semitism resisted, and feel gratified by our son Jeff’s involvement in DARA, Doctors Against Racism and Antisemitism.

This experience of writing about our lives for the Book of Life has made us realize that there is a story behind every person.  Our story has its roots in the love that our parents brought to community and our families.  Our parents would be pleased to know that our Fund at the Jewish Foundation is helping people in greatest need and will benefit our fellow Jews through a broad base of organizations that speak to our families’ passions – the elderly, Jewish education and Israel.