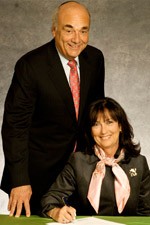 We both come from families steeped in Jewish and Zionist tradition. Lorne came from Hamilton and Carol from Toronto, which provided us with different opportunities and obligations within the Jewish community. Lorne’s mother took her children to shul each Shabbat and belonged to Hadassah. His father could be counted on for the daily minyan and was once Chair of the Board of Jewish Education. All their kids belonged to USY. They always patronized local Jewish businesses, such as the kosher butcher, to ensure the continued viability of their small community. They gave what they could financially and even more in kind.

Being from Toronto, Carol had more opportunities. Both her parents received a formal Jewish education. Valuing such an education, they sent both of their children to Hebrew day school. Her father was a tireless member of Hashomer Hatzair, the Farband, and Rotary, while her mother was active in Hadassah from an early age. Their son made aliyah several years ago. They also gave what they could and, as time and money became more available, they gave more of both. Carol’s mother was honoured as an inaugural contributor to the Book of Life.

Our families were wonderful role models in their support of the Jewish community here and abroad. Our children went to day school and we value synagogue life. We are thrilled that our daughter has chosen a career in the non-profit sector, currently within the Jewish community. We want our children to appreciate not only the concept of tzedakah, but also that of Gemilut Hasadim – ‘acts of loving kindness.’ We can already see that they are charitable and wish for them the same fulfillment and joy of giving that we feel. We hope they understand that you get back so much more than you give.

Our parents learned from their parents, and we from ours. It is our fervent hope that our children will learn from us and do even more to perpetuate our tradition so that, in these and future times of rising antisemitism and economic distress, the Jewish world community will continue to thrive.