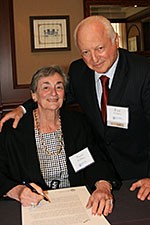 On May 10, 1940, Nazi Germany invaded the country of my birth, Belgium. I was seven years old. Unbeknownst to me, it was also the date of my death sentence, as well as my family’s and of the entire Jewish population in Belgium and in the rest of Europe.

On May 10, 2010, seventy years later to the day, I held my newborn great-grandson in my arms in Israel, the land of his birth!

That I was one of the few survivors of the most destructive episode in the history of our people bestowed on me opportunities and responsibilities. I became part of that gossamer thread of life that links the lost generation of the Holocaust with the reborn nation of Israel.

In my own case, that thread has developed into solid roots in the land of our ancestors. I have been married for forty-five years to Naomi, herself a Sabra; and with three children, fifteen grandchildren, and a great-grandchild all living in Israel, our stake in the future of that country takes on a very personal significance.

In the same spirit, the vibrant mosaic of Jewish life in Canada, energized and motivated by organizations such as the Jewish Foundation of Greater Toronto, provides an indispensable conduit for the continuity of our people on this cruel, but also wonderful, planet.

The Nazi intent was to destroy the entire Jewish people. The timeline of World War II did not allow them to complete their objective. As one of the few who survived the Holocaust, I feel I owe it to the millions who perished, to devote all the energies and resources I can muster and help assure that their precious memories are preserved for all time. I also feel that there is no greater act of redemption than to provide the Jewish children of this generation with the opportunity to fulfill their potential — an opportunity that 1.2 million children of my generation never had.