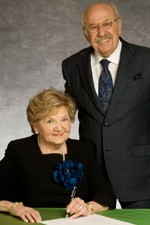 Despite our humble beginnings, Harry and I were always made aware of tzedakah and acts of loving kindness. My grandfather, the learned Michal Turner, and my grandmother, the Bubba Gittel, emphasized, ‘Time is of the essence, so don’t waste it. Share, no matter how little you have.’ My Zaida was the Shamas of a Toronto shul. Although he had very little, he was supportive of our family especially during the Depression. Spending time with Zaida was a true learning experience. He introduced me to Chinese and black people; to the homeless; to elderly in need; to the necessity of building a Jewish homeland. I learned about respect and differences; the importance of education; to appreciate life and its opportunities in a free society. I observed the power of prayer and to demonstrate strength and remain calm under stress. Fortunately, I married a man with similar values. We have built a life on these foundations. Our parents, Isaac and Rachel Suckonic, and Moshe and Reva Gorman, would have been so proud.

We feel blessed and privileged to make a difference in our community. To us, ‘community’ includes worldwide Jewry. In Toronto, UJA Federation, JNF and Baycrest are particularly close to our hearts, along with many other worthy causes. Harry got his financial start as a successful businessman from the Aktzia (Free Loan Society). Harry’s father volunteered as its President, although his day job was making deliveries with a horse and cart. Harry continues to support Aktzia. In 1985, Harry co-chaired a very successful UJA Campaign. He was honoured by JNF (Negev Dinner) and received the Ben Sadowski Award of Merit, the highest citation our community bestows.

A highlight of our volunteerism was to witness the first plane of brave Soviet Jews arrive in Israel. It was bearing witness to history in the making.

Three values exemplify Harry: hard work, determination and conviction. He personifies my grandparents’ advice: ‘Be creative.’ A great example of his creativity took place in 200 when, despite the Lebanon war, we took our children, Earl, Debra, Beverley and Michele, their spouses and grandchildren (19 strong!) to Israel for our grandson Jesse’s Bar Mitzvah. Harry took us on a bus tour of Kfar Gvirol. As we arrived, a dedication banner was unfurled announcing the new ‘Sara Gorman Community Park.’ I thought there must be another Sara Gorman! That is Harry - giving me the best 80th birthday present imaginable, while giving Israeli children a beautiful new park and playground.

Much of my life philosophy was shaped in my youth, particularly during an epidemic period that occurred in 1937 when I was 11 years old. Polio paralyzed my hands and throat. My life was in jeopardy but, miraculously, the polio just disappeared. I learned early that every day is priceless; every day is a chance to improve the lives of those less fortunate.

I recall Zaida on his 100th birthday saying in Yiddish ‘Dos gantze layben is a cholem’ – your whole life is a dream and it’s over before you know it – yes, time is of the essence, so don’t waste it.