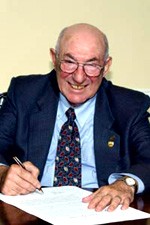 My wife, Sylvia, and I both grew up in Toronto during the Depression. My parents came here from Europe and I was one of 10 children — six boys and four girls. I've been married for 58 years and I've been involved in the Jewish community for 57 of them. From 1933 to the end of the war, anti-Semitism was rampant. It was very difficult for Jews to get work or get into university.

I joined the Canadian Armed Forces in 1940 and was followed by my late brothers Louis Greenblatt and Sydney Green, while my brother Jack Greenblatt, who now lives in Cincinnati, served in the U.S. army. I never really thought much about philanthropy until I came home from serving in Europe in WWII. That experience greatly affected me. I saw some of the horrors of the Holocaust firsthand and realized the importance of building a strong Jewish community. In 1948, I started fundraising by knocking on doors.

Throughout my business life I became more involved, but I've been most active during the last 22 years of my retirement. I even volunteered for one month in Israel, working with active soldiers, cleaning tanks and helping to boost their morale. I've always felt the advent of Israel has been a great thing. The Jewish people have gained respect by securing the land of Israel.

Today I make a great many phone calls as a canvasser and I'm at the Lipa Green Building several times a week. It's my nature to be involved. I've watched six generations come up through UJA Federation and I've met a lot of nice people over the years.

About 20 years ago I started a fund through the Jewish Foundation. I've managed to contribute substantially to it every year and now I'm a member of the Foundation Board of Trustees. Some day, our daughter and grandson will make sure our donations are used wisely and well. I contribute to many causes, but my main interest is to see that we continue to have one of the strongest Jewish communities in North America.