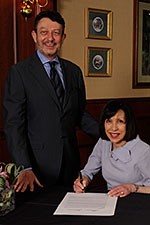 Tzedakah was a central theme in the lives of Kay Z"L and David Z"L Greengarten .From an early age, we remember our parents’ generosity and commitment to helping others.

Our parents were born in Canada — Dad in Winnipeg and Mom in Toronto. Dad moved to Toronto after the war to become the cantor of the Beth Hamidrash Hagadol on McCaul Street, one of the forerunners of Beth Tzedec Congregation. Mom’s family were shopkeepers and owned a grocery store on College Street at the time our parents met in Toronto, shortly after World War II.

Dad worked in business management and, at the same time, served as a cantor in several Toronto synagogues, including Shaarei Tefillah, Beth David, Beth Sholom, and Shaarei Shomayim. Mom managed our traditional household and raised four children, all the while volunteering on behalf of a wide range of organizations in both the Jewish and broader communities. We were all educated at the Associated Hebrew Schools and CHAT, and our parents were very proud that their nine grandchildren also attended day schools.

The war years, the Holocaust, and the rise of the State of Israel were significant factors in shaping their lives and values. Our parents believed in the importance of Jewish continuity and the role of Jewish communal institutions. In selecting Associated Hebrew Schools, Baycrest, and UJA Federation as beneficiary agencies of their endowment fund, they wished to recognize organizations that espoused the values and ideals they cherished — Jewish education, care for our elders, and the support of Jewish social service agencies and Israel. These were commitments they both supported monetarily and through volunteer work. Mom volunteered in the library at the Associated Hebrew Schools, and she was a well-known fixture on Baycrest’s patient floors, delivering books to residents and taking the time along the way to visit with them. For many years, they delivered meals through the Meals on Wheels program. In their final years, both Mom and Dad benefited from the services of Baycrest.

We are proud of our parents’ decision to establish an endowment fund at the Jewish Foundation, and we are delighted to carry on their tradition of tzedakah.