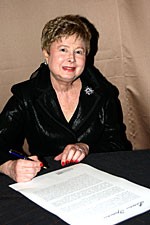 For as long as I can remember, I had wanted to spend time in Israel. The land of milk and honey beckoned from across the ocean, as though drawing me by a silken thread, luring me with stories of antiquity and attractive opportunities. As a burgeoning young writer, with a small contract from a Canadian Jewish newspaper in hand, I flew to the land of my ancestors, settling in Jerusalem for several months.

Through numerous helpful contacts, I met many devoted individuals who lived useful lives, contributing to the well-being of all Israelis, no matter what their religion or background. In particular, I was attracted to those involved in education, whether in the universities or at grass roots level. Education, it appeared to me, was the key to lifting people out of their ordinary, often difficult lives, giving them more independence and feelings of self-worth. While visiting a small college for international students in Haifa, I learned of new and original schemes for working with youngsters, and, later, I accompanied a female Druse community leader from village to village, where she provided basic social assistance to families. From these experiences I became aware that women were responsible for much of the innovative and experimental educational activities in modern-day Israel.

Now, and largely for these reasons, I have resolved to leave a legacy to the Hebrew University in Jerusalem through the Jewish Foundation of Greater Toronto. This choice merges two of my passionate concerns, the advancement of women and the well-being of Israel. My decision also stems from my own life experience, coming of age as a young woman in the sixties when studying abroad was less fashionable than it is today. It took much determination, commitment and self-discipline to achieve my dream of graduating with honours from a New York university, and subsequently pursuing successful careers in writing, teaching and public relations.

I firmly believe that women are capable of great achievement, but are still not afforded the same range of opportunities as men. In particular, recognizing the current limitations and deficiencies of the Israeli government and its bureaucracies, I am confident that well-educated, idealistic and visionary women can and should emerge as the future leaders of this beloved country. To achieve such goals, women must have the tools and the skills to succeed; education of all kinds is the key to obtaining these.

I hope that my commitment to the University may in due course affect not only Israel, but also the Middle East and the world as a whole. After all, my legacy should be available to any Israeli woman who merits the opportunity, whether Arab, Druse or Jew. The recipients are to be chosen entirely on the basis of their achievements and potential, not their religion. And I know that there are many capable and deserving women out there.