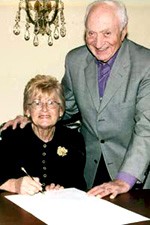 I was brought up with the idea of Tzedakah. I lived in Poland until I was 10 years old, and until then my grandfather played a very important role in my life. He was the one who taught me about charity, and stressed the importance of a Jewish education. After regular school ended at noon, we went to cheder until 8:00 at night.

After my mother passed away, I came to Canada to live with my father. I saw that in a very quiet way he gave what he could. I believe that this is the way to contribute.

I attended the Talmud Torah after public school. When I was 16, I quit school to go to work and help out, but it was very important to me to continue my education, so I enrolled in night school at Central Commerce.

When I went into business, I became involved with UJA and then Israel Bonds. I remember the parlour meetings Jean and I had in our home. Over the years, I've also held senior positions in synagogues here in Toronto. About 15 years ago, Ben Snider approached me to make an endowment gift through UJA. I also bought a room at C.H.A.T. and worked on their capital campaign, soliciting others to do the same.

Now, I am not as actively involved, but of course I still contribute. I am passing on the torch. I think it's important that younger people participate and work for the Jewish community because we have to take care of each other.

Now more than ever, with the current wave of antisemitism that we see everywhere, we have to stay strong. The needs of our community are great, and when you explain to people in the proper way how important it is to support Jewish causes, they respond.

Jean and I are very pleased that our two sons live with the Jewish values that we showed them in our home. They know how important the mitzvah of tzedakah is, and in turn have passed that on to our two grandchildren. Carrying on the tradition means a great deal to both of us.