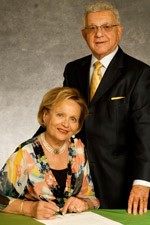 Ruth: I was born in Czernowitz, then part of Romania. I was fortunate to have survived the Holocaust, together with my family, avoiding deportation to a concentration camp in Ukraine, thanks to my father who paid an officer to have our names disappear from the list. Nevertheless, we endured a painful three-year separation from my father when he was taken away and forced into a life of hard labour.

My mother, grandmother and I remained in Czernowitz, where we were forced to spend time in a ghetto, wear the yellow star, obey a strict curfew and were barred from public activities.

After the war, we were fortunate to be reunited with my father and, in 1951, after a short stay in Israel, came to Canada so that my mother could rejoin her brothers who had immigrated before the war.

Lony: I was born in Botosani, Romania, a city that was 80 percent Jewish. My father, a visionary and generous Zionist, began buying land in Palestine in the 1920s and 1930s, giving it away to young people to make aliyah. He was instrumental in establishing an ORT school, a Jewish free loan society bank and other important institutions. In 1940, he was named the head of the Jewish community and, in this capacity, was able to rescue more than 1,500 Jewish orphans from the killing fields of Transnistria in Ukraine.

Although we suffered many hardships, we were luckier than most of our people and, after continuing our respective educations in Canada, were married in 1958.

We both came from traditional families and tzedakah played a very important role in our upbringing. Our parents, as new immigrants, faced and overcame many challenges but, despite their own hardships, they always shared with those in need.

This peek into our past illustrates why we are committed to lives of tzedakah. We are fortunate to have had a great marriage for over 50 years. We have raised three wonderful children. They are all married - Myra to Steven, Bernie to Elise and Pearl to Drew. They, in turn, have given us ten of the most wonderful grandchildren who all have, or are still, attending Hebrew day schools. We hope they will continue the tradition of tzedakah.