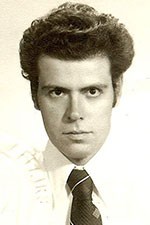 John Haas Z"L was a quiet gentle man who chose to live life humbly and unadorned.

His personal goal was to maximize his charitable giving and create a financial legacy to help other Jewish people with personal difficulties.

John was the only child of Istvan Z"L and Barbara Z"L Haas, Hungarian Jews who survived the horrors of an unforgettable period in history. John learned the value of hard work and the value of money from his parents whom he adored.

John regularly attended Congregation B’Nai Torah and enjoyed being at the Shabbat table with us and others who appreciated his company. John’s curiosity and concern about the well-being of people was sincere and touching.

John well understood how it felt to be in need because he experienced it first-hand. He was also genuinely pained by the suffering of others. This heartache was one of his deepest inspirations in developing a legacy plan to honor his parents and ensure aid for people in need. In his own discreet, calculated and organized manner, John began a personal journey to establish a financial bequest through the Jewish Foundation of Greater Toronto (and many other organizations).

John was committed to the general concept of giving but in truth he needed to be directed to the Jewish Foundation by people he trusted. He then embraced the idea with full focus. This example of guidance speaks to us all when opportunities to do so arise.

By profession, John was a serious and methodical insurance underwriter. He was also more of a businessman and investor than all but a few realized. After careful scrutiny and analysis of the Jewish Foundation’s management and operations, John was impressed and recognized that the Jewish Foundation could best meet his personal goals through the many organizations it supports. Through his partnership with UJA and the Jewish Foundation, John combined his goal for Tikkun Olam and his personal mission to help people with difficulties. He was comforted knowing that these goals would be preserved in perpetuity.

This legacy (together with additional generous bequests) will ensure that Barbara & Istvan Haas and also John Haas will never be forgotten. They will live forever and in turn their generosity is a reminder to us all not to forget people in our community that are often overlooked. Through the endowments of John, Barbara & Istvan Haas, many people will avoid suffering or suffer much less. What an unbelievable legacy!

As written by Jerry and Tammy Balitsky, executor and friends