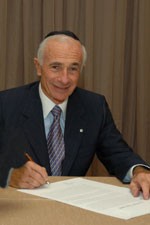 My early experiences with community began when I was in my late twenties. Recently married and just graduated from University. I took on a few cards to canvass with UJA and felt that I did my part. I believed then — and still do — that we all have to give back to the community.

It was just a couple years later, in 1962, when tzedakah began to play a bigger role in my life. I went on a UJA Young Leadership Mission. Seeing and experiencing Israel that first time shifted my view of giving from one of obligation to something much more meaningful: I really wanted to make a difference. It became a life-long passion.

I was inspired by the magnificence of what Israel had achieved so quickly and with so little - and was equally awed by the magnitude of what was still needed. I realized then that Israel needed us and that we needed her — equally. This is still true today. We must support one another if the Jewish community is to survive and flourish.

I've since been to Israel at least 40 times and have held many volunteer leadership roles within the Toronto community over the years, including: chair and/or co-chair for three UJA Federation Campaigns; President of United Israel Appeal of Canada and of Canadian Friends of Hebrew University of Jerusalem — and others in and outside of the Jewish community.

While I've received gracious recognition for my efforts, my greatest reward has always been the experience itself. And of course, the joy of meeting terrific people over the years and establishing many meaningful relationships.

Knowing you made a difference and the joy of giving is something you need to experience for yourself. I think if we can bestow that kind of spirit in our younger generations then they will be able to carry the torch forward and create a dynamic future for the Jewish community here in Toronto and in Israel.

I created my UJA Endowment to continue what I've stood for all of my life. And because I am so thankful for all the gifts I have received in my own life — most importantly the love of my beautiful family: my wife, Tootsie, and my daughters, Wendy and Michelle and their families.

My message to others: Get involved, go to Israel, get a taste of Jewish and community life. Make a difference. Start today.