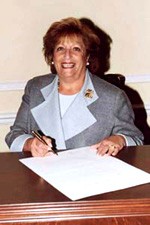 I came to Toronto from Leeds, England when I was 10 years old. Ours was a traditional Jewish home, and my father had a tzedakah box that we contributed to for a variety of Jewish charities.

I first became aware of the importance of being actively involved with the Jewish community when the 6-Day war brokeout, and my late husband Max took time away from his business, as did many other people, to solicit and collect donations to support Israel in her hour of need.

Max urged me to become a volunteer working on behalf of Israel. I started in UJA when Marvelle Koffler was chair of Women's campaign. We adopted the idea of the $365 box, where women agreed to donate a $1 a day for a year. I was in charge of dropping off and collecting the boxes. I also initiated the Lion of Judah category in Toronto, already popular in the U.S. Women who make an annual campaign gift of $5,000 are given a very special pin to commemorate this distinction. I introduced the first pin in Toronto when I became Chair of the Women's Campaign in 1986. Today there are over 500 women in Toronto who proudly wear the pin.

My children grew up seeing how important it was for Max and me to contribute to the ongoing needs of the Jewish community. The Handelman family is affiliated with Zareinu, Jewish National Fund, Baycrest Centre, and Shaare Tzedek Hospital. However, UJA Federation still remains most important to me, because as the umbrella organization for our community, it supports so many agencies and worthwhile causes.

I believe what's most significant is passing on from generation to generation the connection and responsibility we feel for Jews everywhere in the world. When I asked my grandson, who was on a tour in Israel this past summer, what the most memorable part of the trip was, he said it was the emotion he experienced when his plane touched down. Hearing him say that makes me realize that Max and I have managed to pass our values and traditions on through our children to our grandchildren.

I am proud that I have endowed my Lion of Judah gift. I think of it is a very small piece of the big picture, but if everyone left something small, our collective future would be in terrific shape.