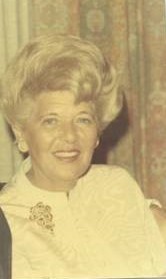 Alice (Allie) Suroff was born on June 29, 1911 in Toronto.  She was the seventh child of Ida Barkan and Hyman Suroff, who, at the turn of the century, emigrated from Russia to New York and then to Toronto.

Adored and nurtured by her older siblings, Allie enjoyed a happy childhood and teenage years. In 1933, at the age of 22, she married the love of her life, Bernie Herman, an Osgoode Hall law student.

Allie grew into a beautiful woman known for her warmth, kindness and elegance. Like most women of her generation, she did not work professionally outside her home.  She was a proud wife and devoted mother to her two daughters, Carole and Wendy.

Embued with sound Jewish values, Allie became a stalwart campaigner for Israel through UJA and Hadassah-WIZO.  She prided herself on being a top contributor to the Women’s campaign — and in addition to serving as a Chair of Hadassim and Toronto’s annual Hadassah Bazaar, Allie mentored young brides when they created new Hadassah chapters.

As the founding Chair of the New Mount Sinai Hospital gift shop, she often said: “Now I think I could run Eaton’s.”

An independent woman — Allie was ahead of her time.  Beginning in the 1950s, collecting art became her passion and she spent days in art galleries amassing a prominent, contemporary art collection.  She taught herself Braille and became an official CNIB Braillist, producing novels and textbooks on a manual Braille typewriter, for young blind students.

Deeply committed to her family and many friends, she was a loving mother and grandmother to eight grandchildren.  Allie Herman’s memory lives on in the hearts of her adoring family and in two of her great-granddaughters who carry her name.

As written by her daughters, Carole Herman Zucker and Wendy Eisen