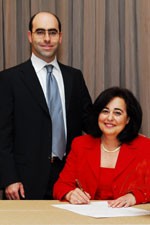 As Holocaust survivors, my parents fled to Italy after the war. Jewish life was not a priority for them at that time. It was still about survival and rebuilding their shattered lives. As such, in my early years I was raised without any connection to or awareness of my Jewish identity.

Post-war life wasn't easy. My father struggled to re-establish himself as a doctor, first in Italy then in Canada when we emigrated in 1950. We moved from city to city — arriving in Vancouver and making our way to Weyburn, Saskatchewan then to Winnipeg. We eventually settled in Toronto where my father built his practice in the Italian-speaking community.

Having been schooled by nuns in Italy and without any reference to Jewish life at home, my sister and I didn't even know we were Jewish when we arrived in Toronto! We moved to a flat upstairs from a Jewish family and it was the eldest daughter who told me I was Jewish. I was twelve years old at the time.

I began to participate in some of the Jewish activities with their family and over the years explored a bit more of my Jewish identity. It was not until my husband, Victor, and I married that we both began to take our Jewish life more seriously. Victor grew up in Russia so he too grew up without much of a Jewish background. We wanted to give our children, Eric and Talia, more of a Jewish life and so we joined the Holy Blossom Synagogue. Both of my children became involved — Eric as a Sunday school teacher after his bar mitzvah and Talia as a member of the choir.

Today, we are delighted that they are involved with the Jewish community.

I was introduced to UJA Federation through my work as a lawyer specializing in working with donors and charities with respect to charitable gifting and a host of issues facing charities in today's tax and regulatory environment. I was impressed with their work and appreciative of the professional opportunities I've had with this community, I wanted to give something back. I decided to make a Lion of Judah gift.

My gift is inspired by my parents' experience as Holocaust survivors. They didn't have the luxury of celebrating and experiencing their Jewish identity. My hope is that future generations do. May we always have the freedom and right to know who we are, to celebrate our faiths and respect diversity.