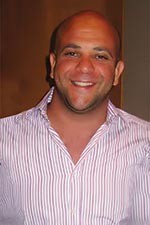 Daniel had a special quality of lighting up a room wherever he went. He had a remarkable gift of attracting people and making friends – everywhere. A deeply loved son, brother and uncle, the life of the party, the class clown. Daniel also had a mischievous side and loved to play pranks. But it was always about making people smile and laugh. And that they did!

This was an undeniable side of Daniel that was authentic to the core. He was loved by so many people and he loved back just as deeply and with loyalty in return.

But there was another side too. Daniel suffered deeply from periodic episodes of severe depression. Most people didn’t know this side as he kept this private.  Only his mother and close family knew of Daniel’s pain.  Sadly, Daniel took his life during one of those terrible episodes – he was only 35. It was during Rosh Hashanah in September 2012.  Needless to say he left an indelible mark of loss – but also a rich treasure box of memories for anyone who had the opportunity to meet and know Daniel.

More than 900 people attended his funeral and at the time of writing this story people are still reaching out to our family, visiting his resting place, and making plans for a fundraising event to honour Daniel’s memory and raise awareness of the issue of depression.

Friends, family, co-workers and community members still recount stories of how Daniel touched their lives. The details differ but the themes are always the same: his generosity, his humour, his unique ability to inspire a heartfelt connection - and so much more.

Daniel also had an enormous love for Jewish life. Raised with traditional Jewish values and customs, Daniel embraced it all. He visited Israel many times and, there, we saw another facet of Daniel – a warm, soulful, loving embrace of Jewish tradition and a further deepening of his Jewish identity.

A good friend recently shared a story that a rabbi had told her. The rabbi explained that while each memorial stone has two dates separated by a dot – one for the beginning of life (birth) and the other for the end (death), the length of life is not what makes for a good life. It is really all about what happened between the dots.

Although too soon for us to say goodbye, Daniel lived and loved so very fully in between his dots.  We will never forget him and we are changed because of how he enriched our lives.

As told by his mother, Lesley and two sisters, Tracy and Louise