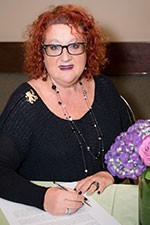 Her glass was always half full.

Strong, caring, wise - Shirley Jackson - a woman who loved her family, her students, campers and her community.

Born in Montreal in 1936 to parents from Bessarabia and Liverpool with an older sister and younger brother Shirley grew up with a positive outlook on everything.

Her love of children determined her path and she graduated Macdonald Teacher's College, part of McGill University and loved every minute in the classroom. She went on to earn a Bachelor of Education and certifications in both special education and teaching English as a second language.

Like most children, we took our mother's efforts for granted. She opened a Jewish day camp to help our shul pay the bills, took care of our father who was ill for six years before his death, went to school at night to further her education, volunteered for the shul and B'nai Brith Women and took care of the three of us. It is only now as adults we look back and have some understanding of how hard she worked to allow us to become who we are today.

In 2000 she suffered catastrophic injuries in a car accident but even that didn't dampen her spirits. She came to live in an assisted living environment in Toronto and would actually tell people, "it is a good thing I had the accident because if I hadn't I never would have moved to Toronto and been able to see my grandchildren grow up".

It is remarkable to all who knew her - she never complained, never had regrets, never gave in to despair and always saw the world through bright and optimistic eyes. She would be so pleased to know that there is fund at the Jewish Foundation in her memory.

A glass half full.

As written by her daughter, Susan Jackson