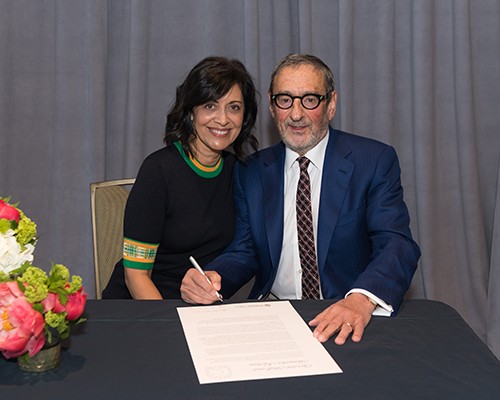 Gerald Sheff and Shanitha Kachan’s philanthropy is shaped by a mutual commitment to bettering the well-being of their community. While they come from different backgrounds, their giving is guided by shared values and interests. They support a variety of community organizations, including Jewish causes, healthcare, education, and the arts.

Gerry grew up the eldest of 4 children in a traditional Jewish home in the Plateau area of Montreal. His grandparents immigrated from Russia in the early 1900s. His parents, Louis and Sally Sheff, were born in Canada. In the Sheff home, there was always a concept of charity and giving what you could to those less fortunate. Jewish communal causes and Israel were at the top of the list. Gerry was 8 years old when the State of Israel was established. From that seminal event, he developed a deep sense of commitment to both the Jewish community and the State of Israel.

Shanitha was born in Dublin, Ireland, the daughter of an Irish Catholic mother and a Guyanese Hindu father who had converted to Catholicism. The eldest of 5 children, Shanitha was raised with a strong sense of tolerance and curiosity about diverse communities and cultures. Her father was a physician who immigrated with his family to Canada to practice medicine in rural Saskatchewan. Sadly, Shanitha’s father passed away leaving her mother widowed with 5 young children. The support and generosity of the surrounding community played a pivotal role for the family during this difficult time, and shaped Shanitha’s future involvement in volunteerism and philanthropy.

Together, Gerry and Shanitha have a large blended family of 6 children and 7 grandchildren plus one more on the way. Their family is defined by tolerance, acceptance, and mutual respect. Over nearly 20 years of marriage, Shanitha has become deeply involved and connected to the Jewish community. She converted to Judaism in the summer of 2017, and Gerry and Shanitha were then married Jewishly in a surprise, outdoor wedding during a Sheff family reunion. Standing under the chuppah at their family cottage in Muskoka, surrounded by the love of family and pets, is a moment that will forever be a highlight of their lives.

Gerry and Shanitha have been involved in a variety of transformative philanthropic efforts. They strive to lead by example and to be personally involved with the organizations that they support. They are honoured and proud to share their family story and to be a part of the Book of Life, especially this year, when their daughter Laurie Sheff is chairing the program.