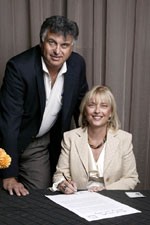 My wife, Ester, and I come from two very different places. I grew up in an apartheid South Africa while Ester was raised by her Polish-immigrant parents in Winnipeg. Despite our apparent differences, when we met in Toronto, we discovered we shared much common ground including a sound background in Jewish tradition and education. Preserving our Jewish heritage and identity was, and continues to be, a priority.

Like most married couples, we became very active in the community when we became parents. Our children attended USDS and The Toronto Heschel School, where I was actively involved with its Board, eventually becoming its Chair. Ester was busy doing volunteer work at both schools.

Ester and I feel that a formal Jewish education is an important tool in sustaining our community. We have both benefited from strong Jewish educations and have made it a priority for our two daughters, Nina, 19 and Danielle, 16. Danielle currently attends The TanenbaumCHAT, and Nina graduated from there last year.

Being involved with our daughters’ schools made us aware of the challenges of attracting and retaining students. It troubles us to see the decline in student numbers, despite the incredible amount of support that comes from the community. This reinforces our reason for setting up an endowment with the Jewish Foundation. Our ultimate ambition is to guarantee a formal Jewish education for every Jewish child. We are comforted to know that, because of our gift - and the gifts of others who value the survival of Judaism and its people - something will be made available for future generations.

It is so important for us that our children carry on the traditions we taught them. The reality is that we cannot safeguard every young person from a society of pervading assimilation. However, we can do our best to provide each generation with as much knowledge of, and appreciation for, Judaism.