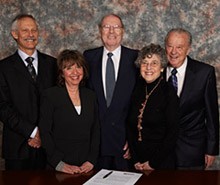 Ben and Hilda Katz were proud to be Canadian citizens. They immigrated to Canada between the two World Wars. Both came from humble beginnings and throughout their lives they expressed deep gratitude for their freedom and opportunity in Canada. And while they were financially successful, their greatest concern was always for those who were not.

Ben was orphaned at a young age in his native country Poland, and was raised by his maternal grandmother. Hilda’s family also came from Poland when she was a young girl. Both Hilda and Ben experienced the struggle of poverty and never forgot. This is undoubtedly what propelled them to be so fair and benevolent. Despite being one of the largest donors in the history of the Baycrest Home for the Aged, they would refuse honours and dinners, with Hilda remarking that the expense of a dinner should instead be a contribution to more valuable Baycrest needs.

The Ben and Hilda Katz Charitable Foundation was established in 1988 and has been supporting countless causes in Toronto with a focus on both the well-established and the lesser-known organizations.

Today the Ben and Hilda Katz Charitable Foundation supports many organizations ranging from the arts to humanitarian relief efforts. A recent addition has been a gift to the March of the Living, an annual educational program offered to Jewish students who travel first to Poland to learn about the Holocaust and then to Israel to rejoice in its accomplishments.

The goal of this support is to give some students, who cannot afford to pay for the two-week program, the opportunity to participate. This is in keeping with Ben and Hilda’s belief that a needy, deserving individual should not be deprived of this educational benefit. The hope is to attract other donors to commit to such important funding.

Ben and Hilda exuded fairness, kindness and modesty. They were an exceptional couple and their memory is honoured each time a person is helped through their foundation including the participants in future March of the Living programs.

As told by their nieces and nephews