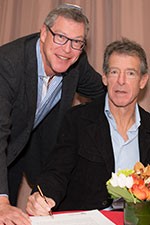 My father, Manny Kimel Z"L, was eighteen when he fled Poland in 1939 to escape the Nazi horror. He came to Canada with his three brothers, Leon, Jack and Syd, and settled in Toronto where he met my mother Eva Z"L, born and raised in Canada.

My father came from a generation of farmers, but his street sense was sharp and he had a nose and passion for business. In the 1950’s he established a textile business which he grew over the years with dedication and success. He was the classic entrepreneur, loving his work and taking great pleasure in building the business. And while my parents strongly encouraged me and my siblings to pursue higher education, which we did, my father was extraordinarily pleased when my brother, Ron, and I joined the family business.

With success comes the obligation to give back. My parents felt strongly about this and gave generously. My father gave financially, anonymously in the early years. My mother gave of her time. She was always involved in volunteer activity, be it with Mount Sinai, Ort, Hadassah or another organization in need.

My parents learned their Jewish values from their parents and, in turn, passed them on to us through the example of their daily life. Tzedakah, in particular, was a core value. In 1984, they started the first of our family foundations, the Manny and Eva Kimel Foundation. My parents encouraged me, my brother and my sister Elkie Z"L (who passed away in 2005) to give to our family foundation. We learned to take individual responsibility for our giving while also appreciating that giving collectively made for greater impact.

My own Jewish identity is a composite of a lifetime of moments and memories. Our home was infused with tradition and Jewish values. Friday nights were abundant – with food, conversation and a table where we were surrounded by aunts, uncles, cousins and anyone in need of a welcoming Shabbos experience. Although my father worked a lot, Fridays and Sundays were sacred family time.

My mother passed away in 1988 and my father in 2011. They left an important legacy for our family and for the community. They taught us well. In turn, we are doing our best to set an example for our children.

As told by their son, Warren Kimel