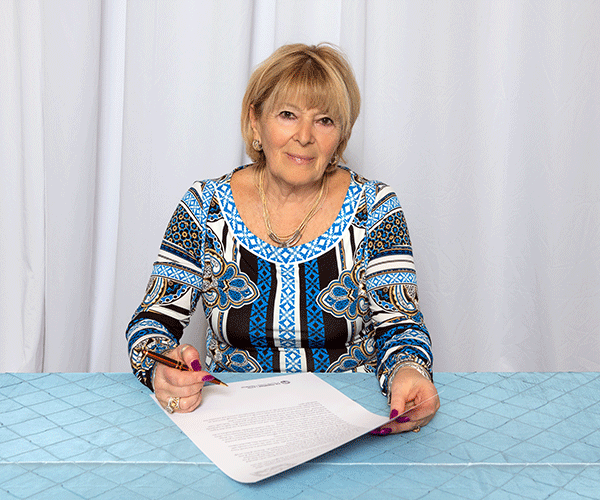 Sam and I both grew up in Moldova. He was from a small shtetl near the Romanian border called Edinets, and I was raised in Belts, where we first met when I was only 19 years old and Sam was 23. We married soon after and had our son, Michael, and five years later, our daughter Irine. We were happily married for nearly 54 years.

In Moldova, Sam worked for a government organization as a mechanical engineer, and I attended university to study teaching. Under Russian rule, religion was not allowed.  In the early days of our marriage, we lived with my mother in law, who was an observant woman despite the government laws. She kept Shabbat, observed kashrut, and prayed during the holidays.  There was a lot of anti-Semitism around us. At school, Michael was often targeted for being Jewish.  Because of this, we left Moldova for Israel, arriving soon after the Yom Kippur War.

In Israel, we adapted well, attended an ulpan, and found jobs.  Sam volunteered in the Israeli Army. Eventually, Sam received a job offer in Calgary, where we moved in 1976. We came to Canada with nothing, but worked hard and built a good life. Our children were content; they attended Hebrew school, high school, and later moved to Ontario for university.

Despite the fact that we had to start over many times in different countries, Sam always provided support and happiness to the family. He would look for the positive, believing that there is good in everyone. His upbeat personality led him to success in a variety of business endeavours. He always remembered his roots and paid a caretaker to preserve the Jewish cemetery in his home town, where he would visit every few years to ensure its upkeep.  He also created a fund for retired teachers in the town, as I had been a teacher in the Soviet Union.
We moved to Toronto after our children settled here, and were very involved in our Shul, Beit Rayim.  We enjoyed participating in the UJA Walk every year and travelled to Israel often, both to visit family, and for our grandson’s bar mitzvah. Sam was very close to our four grandsons – Noah, Josh, Liam and Daniel - and he inspired our second oldest grandson, Josh, to become a pilot.

It was the desire to live as Jews that led us to start a new life in Canada. Through this Fund, we hope to enable others to live a Jewish life, as we honour Sam’s beloved memory and remember his wonderful spirit.