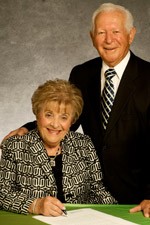 Howard and Nancy Kleinberg are two of the most joyful people you are likely to meet. Their trademark smiles radiate a warmth and satisfaction one might expect from a couple who have lived a life of contentment and inner peace. The genuine affection they have for people they encounter - young or old, new face or old friend, Jew or Gentile - is consistent with the way in which they embrace life, with optimism, thanksgiving and a sense of celebration.

What makes the Kleinbergs so remarkable is that their adherence to such a positive, life embracing attitude belies the enormous degree of suffering, pain and loss they experienced in the early part of their lives.

Well before either of them had turned twenty, Howard and Nancy had endured years of forced labour, hunger, hardship, cruelty, forced marches, as well as internment in several of Europe’s most infamous concentration camps.

After liberation from Bergen-Belsen in April 1945, they would learn that their parents, siblings and most of their relatives, friends and neighbours had not survived the Holocaust. The story of how these two anguished, penniless, stateless teenagers met one another and then set about rebuilding their lives is inspiring, if not miraculous.

Howard and Nancy were both born in the village of Weirzbnik, Poland. They were raised in traditional, observant homes. Nancy attended Bais Yaakov School for girls and Howard attended a local public school receiving his Jewish education at an afternoon cheder. By October 1942, their town, their world and everything in their lives would forever change.

It took many years and a great deal of ingenuity, courage and fortitude to build a successful, productive life here in Toronto. The values, beliefs and traditions instilled in them by their parents helped give meaning and purpose to their survival. One of those teachings, ‘Ivdu et Hashem b’simcha, serve G-d with happiness and joy’ is a motto they truly took to heart.

On March 15, 2010, the Kleinbergs celebrated their 60th wedding anniversary. Family, Judaism, community and the State of Israel are at the centre of all they hold dear. A kind word, an open door, a willingness to give of themselves and a smile for every person they meet is their legacy.