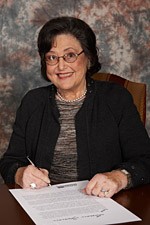 A life is shaped by the people we encounter, the actions we choose, the places we go, and the times in which we live. As I reflect on the path I have chosen, and in some ways, the path that chose me, it is clear that my life is no exception.

I was born, Mira Szusz, in Bratislava, Czechoslovakia and was raised on a feudal estate run by my father. When the Germans took over in 1944, we were sent into hiding: my sister and I with a gentile employee, and my parents in a nearby village. We miraculously survived the war and came to Canada in 1947.

I attended Lansdowne Public School and later, Harbord Collegiate, and while both schools had large Jewish populations, I felt very much an outsider. Fluent in Slovak, Hungarian and German, I struggled, but quickly learned English at school, and later, Hebrew as well.

After beginning my studies at the University of Toronto, I spent a wonderful year abroad at the Hebrew University of Jerusalem. My love of Israel – sparked by earlier experiences with the Zionist youth group HaShomer Hatzair – grew deeper, and remains a guiding force in my volunteer work and philanthropy to this day.

Back in Toronto, I met and fell in love with Saul. We were married in 1957 and moved to Calgary soon after, where Saul joined his father in the roofing business. Eleven years later, we returned to Toronto, building a life for our family, and doing our part to strengthen Jewish life in Toronto and in Israel.

Over the years I have been blessed to be involved in many important organizations including UJA, Baycrest, Or Chaim/Ulpanat Orot Schools, Bar Ilan University and Associated Hebrew Schools. I am particularly proud of my extensive involvement in Canadian Jewish Congress… promoting freedom, human rights and tolerance… where I ended up as Chair of the National Executive. With each role, and to each cause, I have given much – and am forever grateful for the knowledge, friendships and immense satisfaction that I have gained in return.

Our three children, David, Joel and Tamar, have watched and learned, and are active in their respective communities. Four of our grandsons have served in the Israeli Defence Forces and their commitment to the Jewish homeland and the Jewish people is an inspiration. I am hopeful that they will continue their passionate support of the State of Israel, will continue to embrace Judaism and Jewish learning, and will be driven to do their part to make this world a better place. This is the path I wish for them, and for generations to come.