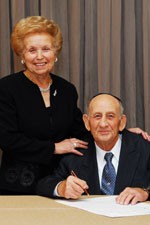 Paula and I grew up in a town called Chenstochova, Poland. We came from religious families, as did most Jewish Europeans of our generation. From a young age, we watched our parents help those less fortunate by whatever means they could. Paula's mother, for example, would bake chalah for poorer families so they could recite the blessings on Shabbat. Such kind gestures left a permanent imprint.

In 1939, our lives were shattered as Hitler and his demons took control of our lives. Paula was interned in the Chenstochova Concentration camp, while I hid for three years in farmers' basements across Poland. We survived, but my parents and all my seven siblings were murdered. Paula lost her parents as well, and, out of seven siblings, she and three others survived.

Soon after the war ended, we were married and moved to Germany. Our first child, Harry, was born there. We made our way to Israel and soon after came to Toronto. Life was not easy since we had no money and no extended family to rely on. But we worked tirelessly to establish ourselves and eventually planted solid roots. We only had our second child, Rosalind, when Harry was 10 years old. We simply could not afford another child as struggling immigrants.

Today, we are the proud parents of two married children and even prouder grandparents to four delightful grandchildren: Anna Rachel, Yonah, Tanya and Steven. They have all received a Jewish education and all uphold Jewish values. Despite the hardship we endured in our younger lives, we felt that they must know who they are — that their identity as Jews is critical. We could never make sense of why we were Hitler's victims but we affirmed that our family's faith in Judaism would not vanish.

Even in today's climate, as we fight against fanaticism and widespread terrorist activity, we are hopeful. We have to live with hope otherwise we would not be here today.

As Israel is, once again, forced to defend her right to exist, we remain steadfast in our support of our beloved homeland. We give what we can and always have. Among our list of involvements, we are past honourees of State of Israel Bonds International Holocaust Remembrance Award Dinner and have donated three ambulances to Magen David Adom in Israel.

Any time we receive an appeal, we respond. No envelope goes unanswered. Any mishluach is accommodated.

We are certain our children and future generations will do as we do because it is in our blood. We are all survivors!