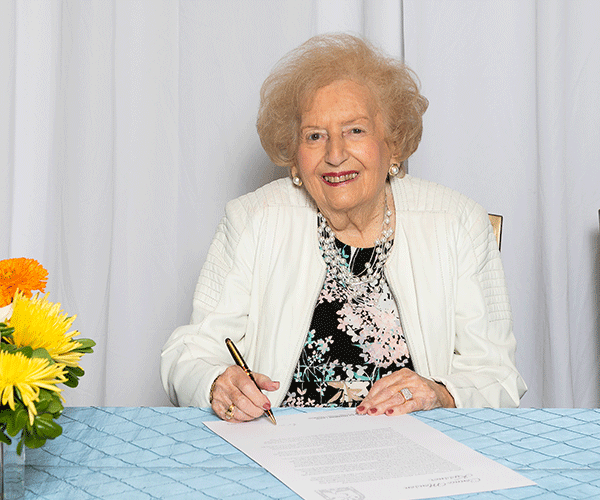 I grew up in Ottawa, the youngest of four, and the only girl. My parents, Moses and Jennie Monson z”l, raised us to esteem tzedakah and helping others. Passionate about Israel, they were involved with early Zionism. We attended shul every week and our home was suffused with love for Israel and Jewry. My eldest brother, Rabbi David Monson z”l, was a Canadian Army chaplain during World War II, while my brother Juair served in the Air Force. After the war, my brother the Rabbi founded Toronto’s Beth Sholom Congregation.

My mother, a wise and feisty woman, influenced me throughout my life. She was always involved with community, and was the first member of Ottawa’s first Hadassah chapter. A strong proponent of education, she believed women should have some financial independence, and even taught Jewish immigrant women how to open a personal bank account. At 19, I graduated with a B.A. from Carlton College, and then went to teacher’s college.

In Ottawa I met Norman Kussner, a medical student at the University of Ottawa. We married and moved to Toronto, where I taught kindergarten. In time, we had five children, three girls and two boys. Our children attended Jewish Day School, and we travelled together to Israel. Shabbat and holidays were always celebrated together, often with my brothers’ families, including my youngest brother Danny, a St. Catharines, Ontario lawyer. Tragically, Norman died suddenly, aged 52.

It was only with the love and support of my family, especially my brother, Rabbi Monson, that I was able to continue.
Over the years, I have been very involved in Hadassah-WIZO, serving several times as President of Haifa Chapter, to which I belonged for 60 years. To recognize my years of commitment, I was recently honoured as a “Woman of Valour”. Another important family cause is Jerusalem’s Shaare Zedek Hospital, and I have been fortunate to travel to Israel 18 times!

I am incredibly proud of my children and grandchildren for embracing the values of community and tzedakah. My eldest grandchildren are CHAT graduates, and some have celebrated their bar mitzvahs in Israel. They have donated to Beit Halochem and the Israel Guide Dog Centre, and, via the Jewish Foundation, have funded the construction of playgrounds in Israel.

I believe it is vital to support Jewish causes during one’s lifetime. For that reason, I have chosen to establish a fund at the Jewish Foundation now, both to serve as an example to my children and grandchildren, and because there is no reason to wait when the need is so pressing today.