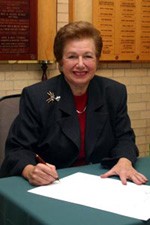 Remember who you are and where you come from.

This is what shapes my thinking around Tzedakah and the message I'd want to send to future generations.

We live and learn through example and I am lucky that I was taught well. I grew up in a family that were Zionists and also active in the Jewish community. My mother was one ofthe founding members Toronto Pioneer Women which later became Na'amat, and my father was a member of the Farband Labou rZionist Organization. It never occurred to us not to be involved.

I guess it was just natural for me to follow in these footsteps. I am a life member of both Na'maat and Jewish Women International and have devoted 20 years of my professional life to the Jewish community as education coordinator at the Bernard Betel Centre for Creative Living.

I went back to earn my degree many years after I married. When I began to work and earn my own salary I felt it was time to step up and give my own personal contribution. We still gave Tzedakah as a family but I wanted to do something additional on my own. I believe that large or small, it is important for a woman to give Tzedakah in her own name. It seems to be the right thing to do and I know from my own experience that it feels very rewarding to do so.

A love of Israel and connection to Jewish community can be ingrained in young people like mother's milk. Looking to the future, I suppose it's up to all of us to do our part and to give what we can of our time and money to ensure future generations know who they are and where they come from. After all, isn't this part of what being Jewish is all about?