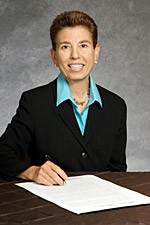 The Toronto story of the Ladovsky family began in the early 1900s, when my grandparents, Aaron and Sarah Ladovsky, immigrants from Kielce, Poland, opened a small coffee shop. Everyone felt at home at Ladovsky’s, (formally known as “United Bakers”) and Aaron insisted that every customer should leave satisfied. He operated the business with a generous hand and an open heart, often sending travelers off with provisions for a week or two, trusting that they would one day provide for themselves. Our Federation and social service agencies subscribe to the same concept to provide the skills and the financial assistance so that, one day, they may succeed on their own.

When my father, Herman, returned from overseas after WWII, he took over the family restaurant. He carried on the operation in this same spirit of generosity and warmth for the rest of his life.

My first opportunity to work in our community came in the early 70s, as part of a team funded by the Ontario Government. Our project was to record the history of early Jewish Toronto by interviewing older members of our community. As I tape-recorded their stories of survival, of heroism, of the difficult years of the Depression, I learned the art of being a good listener. Not infrequently I heard mention of my own grandparents’ role in the stories of many who had later found success in their new country. At the same time, I spent lunch hours helping my father at the restaurant on Spadina where I got to know many of the people at the Toronto Jewish Congress and at the agencies working out of the 150 Beverley Street address…that was back when one could still walk across Spadina at D’Arcy Street for lunch at United.

In the 80’s, my love for Israel led me to further involvement with Federation, through missions and committee work. In the 90’s, I co-chaired a UJA Food and Hospitality cabinet. To this day, I remain an active volunteer in support of Federation. I’m also privileged to witness so much positive growth in Toronto’s Jewish community from my perch at United Bakers, the same business my grandparents established nearly 100 years ago.

Like the community we serve, the UB story continues to be written. Daily, I’m invited over to a table to hear someone share a story from the past, to schmooze about the present, or to meet the future generation. And this happens to me wherever I go. On a recent visit to Berlin, I met an Israeli at the Jewish Community Centre. When he learned that I was from Toronto, he told me that he had visited Toronto in 1986 as a Beit Halochem vet. Miki and his group had been guests at our restaurant! He looked at me again, and said…”I remember your father”. He is now the Karen Hayesod representative for all of Germany. His story became part of ours, and I’m proud to say, of my own.