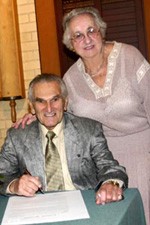 Breaking barriers was not something we did consciously. Rather,it happened by virtue of our efforts as motivated, involved people born and raised in a small rural community, now known as Thunder Bay, Ontario. We learned early on to appreciate our Jewish identity while being appreciated by all our neighbours around us. It was a League of Nations, so-to-speak, consisting of immigrants from many distant countries and we all got along.

While we were accepted in our various volunteer positions with many Jewish organizations' local chapters, we were overcoming societies imposed restrictions as we emerged onto the general scene, Saul serving as Mayor of Port Arthur and then, because of his vision and ambition to see the cities of Port Arthur and neighbouring Fort William amalgamated, he became the first mayor — Jewish no less — ofthe city of Thunder Bay. Adele also made a name for herself through her long-standing involvement with the Children'sAid Society, the Canadian Club, as well as her local interior decorator television program called “Style with Adele.”

Through this extracurricular work, we were emulating the generosity of our parents and, by the same token, setting the example to our five children, Deborah, John, Susan, Shelley,and Mark and our 12 grandchildren. We were taught not only to contribute monetarily but to give of ourselves. And our parents often gave beyond their means, explaining that we should never know what it means to be destitute.

We watched our parents — poor immigrants from Europe—struggle to establish themselves, and, only years later,came to appreciate the many sacrifices they made in order for us to be well educated and afforded any opportunity our hearts desired. We made sure to do the same for our children and their children. We feel we have imbued in them this sense of social and moral responsibility as Jewish people and as citizens of Canada. And we helped pave the way to make their ambitions a reality. We settled in Toronto following our retirement in order to be closer to our children who live in and around the city. Proximity is, in part, what helps us maintain traditions instilled long ago such as observing holidays and celebrating simchas together.

Our contributions to community help preserve our precious yiddishkite and it makes us extremely proud to see our children and grandchildren doing their part, as well.