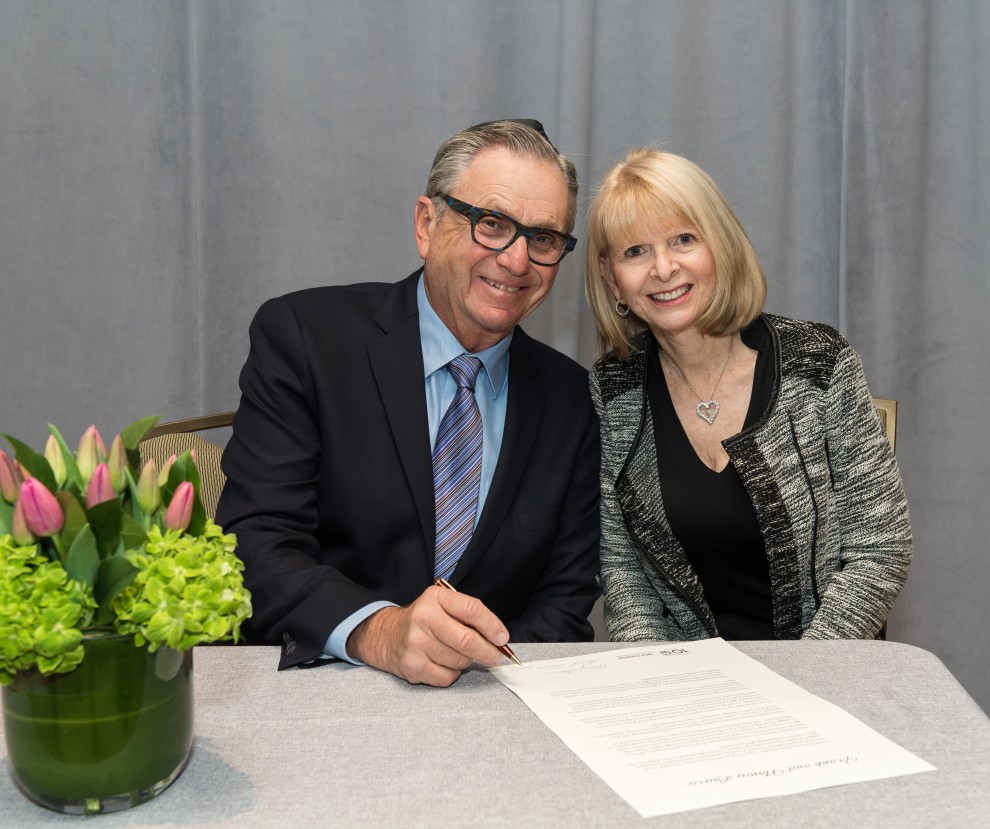 My father, Nathan Laurie, died when I was twelve years old. Three years later my mother, Emma, married J.C.(Cupple) Oelbaum . I learned so much by emulating him and his family’s tremendous tradition of supporting community organizations.  I was brought up to believe that giving to the best of one’s ability is a responsibility of being successful.

Nancy’s father, Harry Kelman, was a shining example of a generous spirit. He used to tell a story about the dilemma he faced as a young man who had pledged more to UJA than he could really afford.  Luckily, a surge in his dry-cleaning business from an itinerant circus allowed him to fulfill his pledge. He was a giver and a sharer, who joined the Shriners and helped many people quietly and without fanfare.  That sense of community commitment was a value he passed on to his children.

Both my mother, Emma, and Nancy’s mother, Margaret, were involved in Hadassah and other charitable endeavours.   And so, Nancy and I were raised with the same value system; tzedakah was a way of life for both our families, an intrinsic component of being a Jew.

It was natural, then, for us to want to instill in our children an awareness of their responsibilities to our people.  As each of our children, Nathan, Mark and Michelle turned thirteen, they were encouraged to give a proportion of their bar or bat mitzvah gifts to charity.  It is our hope that they and their partners, Bonnie, Talia and Francois, will pass that lesson on to our grandchildren, Emmy, Jack, Peter, Hayden, Olivia, Ira and Cy.

Nancy feels strongly that children need to learn early to identify as Jews, to recognize that they belong to a community that needs to be preserved, and that it is the obligation of all of us to contribute to that preservation. None of us should need to be reminded of this obligation; we should be able to internalize it as children, and act on it throughout our lives.  If we do not, our people will have no future.

Whenever possible, Nancy and I prefer to give of our time and resources anonymously, without recognition or acknowledgement. By establishing a Fund at the Jewish Foundation, so that our family can continue our community support year after year, we hope to inspire others to join us in this most satisfactory and pleasurable form of tzedakah.