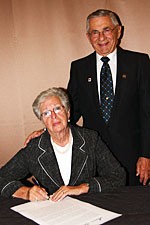 Like many Jewish Torontonians, my late husband and I always felt proud to be Jewish and we expressed this pride through our numerous volunteer activities in the community. Unlike many Jewish Torontonians, our families roots were planted in this marvelous city even before we were born, making us the few among our generation who have called Toronto home all of our lives.

Frank and I met just after he had returned from his service in the Canadian army during World War II. He was a pharmacist by profession and aided injured or ill combat soldiers in Europe. After we married in 1947, Frank began his career as pharmacist – one that would span many decades. It was around this time that his work as a passionate volunteer in the Jewish community also began, and it too would figure prominently throughout his entire life.

Since Frank was both an inspiring and persuasive man, I followed suit and became a volunteer as well. He was one of the top canvassers for UJA’s Annual Campaign, a talent he, no doubt, passed on to our son Norman, who is currently involved with UJA and is also touted as one of its best canvassers. Our daughter, Carol Anne, attended Associated Hebrew School and was instilled with respectable Jewish values from both her formal education and from her upbringing. Our teachings were carried on to our two grandchildren, Sheldon and Andrea, who both participated on Taglit-Birthright Israel and are currently discovering their place in our community.

We cherished the good fortune we encountered in our lives. Through our stable living - Frank was a partner in over 80 Super X Drug Pharmacies across Ontario – we were fortunate to have never required assistance from the community. That is why we lent, and continue to lend, our support to the Federation in every way we can.

We visited Israel three times: once as part of a Pharmacists Mission back in 1969, once with our Temple and once for our grandson’s Bar Mitzvah. Each visit reaffirmed our desire to be involved and to support Israel and our community. I am reassured that the Evelyn and Frank Levine Family Endowment Fund will uphold this commitment in perpetuity.