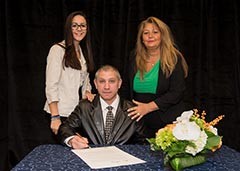 My mother spoke Yiddish before she could speak English. My father attended synagogue services before and after school. These were the Jewish roots I came from, brought over to Canada from England and Russia.

As a Jewish child in Montreal, I was raised to understand exactly who in the world I was. This included instruction by my parents, religious figures and teachers during Sunday School. To me, being Jewish felt like a combination of occupying a special place in history melded with a burden placed upon me by the rest of the world.

During my youth, I took it upon myself to study what I consider to be the greatest event of the Twentieth Century – the Second World War, while mindful that the word “great” doesn’t always entail a positive connotation. My studies left a permanent and influential impression on me, not only as a person born a mere twenty years after this cataclysm, but as a Jewish person, and it meant a great deal on a personal level.

After my formative years, I moved to Ontario. I spent many years feeling isolated from my past, having virtually left my entire life behind. I stored my Jewish identity in a deep cellar, confident that it would emerge in its own time.

My current activities with UJA can be summed up in the word “responsibility”. I am at a point in my life when I can help carry the weight of responsibility within my religion. This process has begun to evolve into a source of pride. After all, if I do not take the place of one of so many who have come before me, who shall? Do we all just wait for someone else to take the first step forward?

I was given the Hebrew name of Zev, which means wolf. This, as it turns out, was no accident. As fate would have it, I share important traits with the wolf, particularly that of protection of the pack. In fact, this trait has presented itself in my chosen profession.

As a result of my life experiences, this is the path that I have chosen: To take my place in history by ensuring that those who require assistance and protection can count on those with the means to provide such that may be necessary; to ensure the continuation of what has been started.