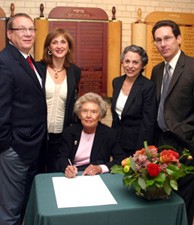 Our parents, Sylvia (Soloman) and Hushy Lipton both grew up in Toronto. Their formative years were defined, as were the lives of so many others, by the depression and the Second World War. Although times were often hard, they were both imbued with a spirit of hard work and philanthropy. Whatever the appeal, donations were seldom refused. To this day, Sylvia's kitchen table has the appearance of a foundation office, with all of the appeals from worthy charities piled up and sorted. Jewish causes have always been of the utmost importance, but many other causes were recipients of their charity throughout the years.

One anecdote deserves to be told. Since the 1950's Sylvia and Hushy donated annually to a girls' orphanage in Jerusalem. I can remember as a child that the calendars from the orphanage always hung in our kitchen. On a trip to Israel in the late 1970's we presented ourselves at the front door of the humble building. We were surprised and gratified when our host pulled out a ledger book with mother's name and a list of her annual donations. It was a memorable experience for both donors and recipients as the appreciative directors of the institution led us on a tour of the building.

When our father, Hushy, died in 2001 it was a natural choice to set up a fund at the Jewish Foundation that would support annual scholarships to study in Israel. Throughout his life Hushy valued education and Jewish causes. When he gave of his time or money, it was always in a modest and selfless way. Hard work and generosity were his guiding principles and the foundation scholarship will be a part of his legacy.

The UJA Federation of Toronto and the Jewish Foundation are tremendous organisations run by dedicated and hard-working people. The employees and volunteers of the Federation embody the combination of philanthropy, selflessness and Jewish causes, which were so important to our parents. It was a natural decisionto set up this scholarship which will contribute to both Jewish Toronto and Israel for many years.