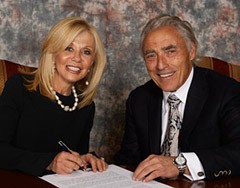 Both Fred and I bore the burden of our parents as a result of separate yet equally difficult circumstances.

I was born in the Bergen Belsen Displaced Persons Camp, after the Holocaust. My mother and father’s families, including their first spouses and children, were murdered at the hands of the Nazis, and I was the sole life that emerged following their union after the war ended.

Fred’s life began oceans apart, in Montreal, but his life would also set course on choppy waters. His father died when he was five and he grew up watching the struggles of a single, widowed mother who was left to raise two young boys on her own. Fred was also in and out of hospital until the age of 12.

We both bore witness to those in pain and we were taught to appreciate the simplest things. When my parents came to Canada, they worked hard and my father did achieve financial stability but he always reminded me to be thankful for our freedom, our comforts and our passions, which included Israel.

Despite Fred’s childhood physical challenges, he was able to extract the good from the situation. He has never forgotten the kindness of the volunteers, particularly the Shriners, who looked after so many children, including himself, in the years he was hospitalized. Their act of kindness undoubtedly laid the ground-work for the donor he would become.

And I will forever feel indebted to my parents, and all of those who perished during the Holocaust, to carry on Jewish traditions and to help my community and our beloved Israel in any way possible.

This is why both Fred and I decided that my long-standing UJA Lion of Judah gift should be endowed. This ensures my support in perpetuity, and is something I have an active hand in to benefit future generations. Our parents’ generation, sadly, could not partake in such a cause. And they did not have the structure of a Jewish community like that which exists in Toronto, in Canada and around the world. They did not have an Israel to call home. But because we do, we must support and appreciate what exists. And we want our children — Beth and Mark, Risa and Mark, Sabrina and Eric, Michelle and Alex, and Jonathan and Jennifer, — and our grandchildren to recognize and safeguard these privileges as well.