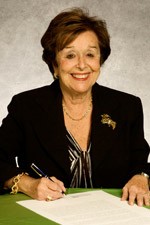 If there is a message to pass on to future generations, it would be a very simple one. Whether through voluntary giving, volunteering, or hopefully both, we always get back much more than we give!

My father graduated from law school in 1929 - very tough economic times as we all know – yet, he was always sharing however little he had, donating more than what was expected, and always thinking of ‘the next guy.’ That is the environment in which I grew up. Manny Godfrey was still volunteering well into his 80s as an aquatic instructor at the Bloor Street YMHA, where he was much admired and loved by all who knew him.

In 2000, Leo Goldhar approached Syd to participate in the immediate purchase of a parcel of land in Vaughan Township that he had been working on acquiring for several years. This project was part of a UJA Federation initiative, created through the Jewish Toronto Tomorrow Campaign, to service families in the most northern reaches of Toronto. Syd did not hesitate to take the opportunity and we were both proud to participate in this forward-thinking and remarkable initiative. The purchase of this land, and the ensuing Jewish facilities, have ensured and strengthened the continuity of the Toronto Jewish community.

Projects in Israel were always on our agenda. We were involved with the Weizmann Institute and the Israel Tennis Centre, to name a few. We were also involved in the Jack Posluns Community Centre, which was very close to our hearts. We attended the emotional opening in Kiryat Shimona with the Posluns family.

As proud supporters of organizations such as One Family and Save a Child’s Heart, we are among those who make a difference in Israel, and around the globe. To see our children contribute to the global Jewish community makes me so proud, and I know Syd would be, too.

All our children contribute in some meaningful way in supporting and strengthening our Jewish community. I hope we have left a proud legacy for our children, grandchildren and generations to come!