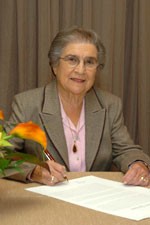 David Marks was passionate about family and Jewish community. He devoted his life to these two passions. His early career steps were in retail business in Hamilton but it wasn't long until he discovered his real passion and purpose: to serve the Jewish community. In 1962, he left retail and applied for a job with Jewish Vocational Services (JVS) of Greater Toronto as Manager of Sheltered Workshops. The rest is history. He worked for nearly 20 years at UJA Federation, 14 of which were served as Campaign Director.

His accomplishments were many. David led and organized some of the earliest UJA study missions; organized the first UJA walk-a-thon in Toronto, coordinated visits to Toronto for the ‘who's who' of Israel, including: David Ben Gurion, Golda Meir, Menachem Begin, Moshe Dayan — and others. He oversaw the 1973 Yom Kippur War campaign, one of the most successful in its times and raised the bar for future campaigns.
David had a gift for fundraising and getting things done on behalf of the Jewish community. Above all, he was known for his integrity and no-nonsense approach. He gave the community his all — then later served as a mentor to others who served the community.

In 1982 David moved on from UJA and became the Director of Development at Mount Sinai Hospital. When he retired years later, he joined forces with three other community professionals and established a private consultancy to help other organizations with their fundraising efforts.

His love of communal work was only surpassed by his love for and dedication to his family. Married to Helen Marks for 55 years, they raised two children, Anita and Irving. He was so proud of them — as well as his grandchildren, Lia, Michael, Robert and Jonathan.

David was always reaching high and beyond simply what was expected. As a result he leaves a legacy of enormous contribution. He made a real difference for the Jewish people — then and for generations to come.