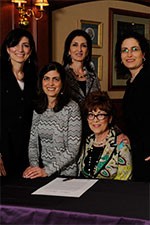 This past year we lost the patriarch of our family, our beloved Benjamin Massouda Z"L. There are few words that can aptly describe how great a man he was, but his legacy speaks volumes, and for that, we are forever grateful. We are most thankful that it didn’t take his passing for us to appreciate him. We recognized his greatness every moment we spent with him.

Benny was born in Cairo, Egypt, in 1926 to Clara Z"L and Jacob Z"L Massouda. He was the fourth of many siblings: Nellie Z"L, Suzy Z"L, Daniel Z"L, Aimee, Tito, Vivi, and Hosna. His father was the minister of health of Cairo — an accomplishment on its own, but because he was a Jew, even more significant. Benny studied at the University of Cairo and trained as a physician. He was to save lives not just as a doctor but also as a member of the underground Jewish resistance. His life-risking efforts saved and protected Jewish lives in Egypt and, by extension, Israel. His selfless acts as a young man were the beginning of a lifetime of commitment to helping others and guiding his family with strong values and a deep reverence for Hashem.

Benny escaped Egypt in 1954. Some cousins were not so fortunate; they were captured, tortured, and hanged. He never forgot.

Benny made his way to Boston to practise medicine, but his trials were not over. In 1955, Egypt declared his passport void and required him to return. It was a ploy to bring him back to be executed. Benny expressed his concern to an intern with whom he worked. The intern’s father was rather influential, with connections to John F. Kennedy, who was a senator at the time. With the help of Kennedy and Canadian politician Paul Martin Sr., Benny settled in Windsor, Ontario.

His work eventually brought him to Toronto, where he served as chief resident at the Mount Sinai Hospital. While treating her father, Max, Benny met the love of his life, Jeanette Podolski. Benny and Jeanette married after a short courtship. They moved to the United States, outside Chicago, and raised their four daughters — Melanie, Clarissa, Marjorie, and Celeste. Because it was imperative to Benny that his own family be close to their extended family and that his daughters be raised in a vibrant Jewish community, they returned to Toronto in the early 1970s. They would now live in the same city as Benny’s father and siblings, Jeanette’s parents, and her sister and brother-in-law, Julia and Henry Koschitzky.

Benny and Jeanette were married for fifty-three glorious years, and they watched each daughter marry, become parents, and — some — grandparents. What his wife, children, grandchildren, and great- grandchildren cherished most was Benny’s endless compassion, devotion, and kindness to humanity. Even when he became ill, he still made diagnoses and never refused a patient. Benny was devoted to his religion and thanked G-d for all his blessings.

as told by his wife, Jeanette Massouda, and his daughters — Melanie Rechnitz, Clarissa Hahn, Marjorie Green, and Celeste Jacobs