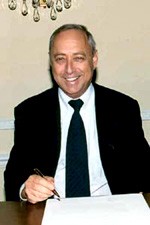 I was born and raised in South Africa in a fairly assimilated Jewish family who originated in Wales. My Jewishness was of a Zionist secular type although we were nominally Reform. My only awareness of Canada was through the Stephen Leacockbooks I read as a child and the knowledge that we had these mysterious relatives who had trekked to the frozen north of Toronto from Wales while we suffered in the African sun!

When I arrived in Toronto for the first time in 1976, I had the privilege of meeting my mother's old aunts who held court in their charming house in Swansea (how appropriate)overlooking High Park.

They were self-made business women who were widowed at an early age and childless but who competed with men on equal terms. The last two died at 97 and 101 respectively. I missed the glory days of their salon but had a taste of it.

The one constant I carried with me on my odyssey was my Jewish identity, which here to fore had been mainly negative and based on a knee-jerk reaction to antisemitism.

To my delight I discovered in Toronto a vibrant and growing Jewish community with a rich and varied cultural and philanthropic life. From the Jewish Film Festival and The Jewish Book Fair to Ashkenaz, and the various aid organizations and community projects to the rich tapestry of "Olim Chadashim" from all parts of the world.

The support I have received both in business and socially in my nearly thirty years here have been a revelation. This half of my life, which has been spent in and around Jewish Toronto, has been a " machaya". Indeed, I have discovered here that the one constant in my life has been my Jewish identity and that is why I am honoured to be able to share my good fortune with the community and identify my entire family with this laudable philanthropic endeavour.