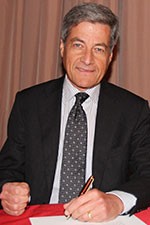 My commitment to the Jewish community has been shaped by my upbringing and by the people who influenced and mentored me at each stage of my life.

My parents, both Holocaust survivors, immigrated to Canada from the DP camps in 1949 and settled in Winnipeg where I was born and raised. I was fortunate to attend Jewish day and night schools and to regularly participate in Shabbat services as a young boy and teenager.

When I was old enough to understand such things, I realized that my father was making annual contributions to United Israel Appeal. He taught me that Israel was much more than the first Jewish State in two millenniums. He believed that the health of the Diaspora depended on a strong State of Israel, because it establishes the unquestionable legitimacy of the Jewish people in the international community. He also considered the pledge of “Never Again” to be best supported by a strong Israel.

When I began my working career in Toronto, my partner Stephen Freedhoff introduced me to community work at the Associated Hebrew Schools. During the next twenty years I was fortunate to work with and learn from a number of community leaders who provided mentorship and helped me develop my love for the cause of Jewish education. These included Henry and Julia Koschitzky, Sid Eisen, Michael Brown, Harold Z"L and Eva Z"LDessen, Morris Kaufman Z"L, Sam Shainhouse Z"L, Louis Weisfeld Z"L and Les Sheininger.

I feel strongly that we must support our community both financially and with our volunteer time. This philosophy explains my long time involvement with the Jewish Foundation of Greater Toronto’s Professional Advisory Committee including two terms as its Chair.

My community service has been inspired by my strong sense of Jewish identity. How lucky we are to live in a thriving and safe community. I consider it our responsibility to do whatever we can to ensure these conditions are sustained. Unfortunately my parents’ extended family of sixty-three members never had that privilege. Their memories have always inspired me to create a better life for Jews in today’s society.