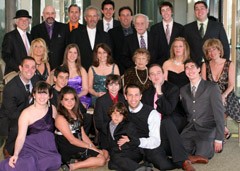 If we had to use just one word to describe our most important and shared value, it would be ‘family’. And so, it is only fitting that we elected to establish a joint family legacy that will provide a gift to UJA’s annual campaign in perpetuity.

Our parents, Al and our beloved late mother Faye z”l, instilled in us an emphasis on family togetherness and in tikkun olam. Following our parents’ wonderful example, we are each individually involved in several charities, but even more so, we are involved as a family.

Early on, our father’s work as an accountant connected him to other Jewish Torontonians and he became well acquainted with the many social services and organizations that assist the Jewish community, both at home and in Israel. Our mother volunteered for decades at Baycrest, among other organizations, and both our parents gave their time and financial support whenever they could. Among their many involvements, they were the lead donors in establishing the Al and Faye Mintz Reena ElderHome.

Our own children (totalling 13 grandchildren for Al, ranging between the ages of 14 to 32), are all acutely aware of their good fortune and opportunities, and they are equally aware of their obligation to do their part just as we have. Many of them are already leaders of charitable events and groups, and all are dedicated to social action.

It was after careful consideration and discussion that we chose to establish an endowment with the Jewish Foundation. One of the main reasons for our commitment is because we appreciate the scope of UJA and all its affiliated agencies, both local and abroad.  Knowing that the reach is so broad ensures that we are a part of a greater group that is able to make a significant impact on so many lives and communities.

We echo our father’s sentiment when he explains the reasons behind his philanthropy.  He is incredibly appreciative for all that he was able to accomplish in this wonderful city, and he feels there is no better way to show that gratitude than to give back to the community that gave him and his family so much.