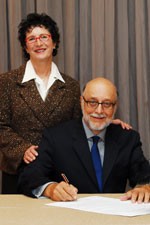 From 1972 to 1980, my wife, Susan, and I were lucky to live in Montreal. During those eight formative years, we went from a newly married couple to becoming parents and becoming active participants in that special Jewish community.

Our contact in the Montreal Jewish community was Rabbi Lavy Becker, the founding leader of the Reconstructionist synagogue. He took us under his wing and introduced Susan and me to the community. Within less than a year we were involved in synagogue life as well as the charitable activities of the Allied Jewish Community Services of Montreal. In many ways Lavy was our role model. He showed us how one can make a contribution to the community at any chosen level —religious, social services, Israel-based institutions, and education and his influence on us remains long after his passing.

My interest in Jewish immigration was sparked by a trip to the Soviet Union in 1974 where I met with refuseniks. After that trip, I realized how fulfilling the work of rescuing Jews in distress was and I became active in the Soviet Jewry movement.

In 1980 Susan and I moved back to Toronto and I continued to work on behalf of Jewish immigrants by joining the Board of the Jewish Immigration Aid Services (JIAS), and served that organization for a period of over 15 years in virtually all capacities including that of National President. One of the most satisfying aspects of the work at JIAS was our ability to help Jews from the former Soviet Union settle in Canada and welcoming over 160 Bosnian Jews to Canada during their civil war.

Settlement of new immigrants meant not only finding jobs and housing for these new Canadians, but also required language training, basic Jewish education and the development of all aspects of citizenship. For me there was a special satisfaction to learn that so many of these immigrants have become full-participating members of our community.

Jewish education is very important to Susan and me. We are fortunate that our sons, Benjamin and Eli, got a strong foundation at United Synagogue Day School and the Community Hebrew Academy of Toronto. Both, along with their wives, Robyn Kaiser and Marni Banack, are committed to the community and volunteer in young leadership projects of UJA and Ben is the co-chair of the Ben Gurion Society of UJA.

We are pleased and thankful that we can contribute to the endowment fund and show our family's commitment to the Toronto Jewish community.